Not only do experts debunk the idea that a cell phone’s location can be determined from assuming the tower it “pings” is closest to it, courts have actually excluded cell tower evidence, finding it unreliable as to the location of the phone at the call.  Across the country, cell phone evidence based on mapping the towers being hit is now under legal attack and scrutiny:

“It is not possible,” Daniel (forensic expert) said, “for anyone to reliably determine the particular coverage area of a cell-tower antenna after the fact based solely on historical cell-tower location data or call-detail records.” He said weather, time of day, types of equipment and technology, and call traffic all affect an antenna’s range.

Jeff Fischbach, a forensic expert from Los Angeles who assisted the defense in the Roberts case, said, “There are so many different factors [involved] that two cellular devices stationed next to each other making phone calls at the same moment could still get different towers. . . . I’ve seen proof that two individuals, subscribed to the same cellular provider, standing next to each other — on surveillance — can still get different towers.”

And as stated in this American Bar Association article:

“Michael Cherry, the CEO of Cherry Biometrics, a Falls Church, Va.-based consulting firm that has led the legal assault on cell tower tracking, calls it “junk science” that should never be admitted in any court for any reason. In fact, he can’t believe that such an easily disproved technique, which has been around for a decade or more, is still routinely being used in court.

‘No one who understands the relevant science would ever claim that data from a single cell tower can reliably be used to specify the location of a caller at the time a particular call is made,’ he says.”

So now that it’s been determined that there are significant limitations to the use of cell phone evidence and that such faulty evidence has been both been used to convict innocent people and been thrown out of court, let’s turn to Adnan’s case. The first case in Maryland to ever use such cell phone tower evidence.

At the end of episode four we heard that the police, despite the many varied versions of Jay’s story, decided to believe him because they were able to corroborate his story. In episode five we learned how. Cell phone tower evidence. The exact same evidence I just talked about above.

According to the Serial team’s investigation Jay’s testimony spanning the day included the “pinging” of 14 towers. But at trial the prosecution only mentioned 4 of those 14. Why? Because, as Sarah said, the others didn’t match up. All day, in fact, from noon to about 6pm, the cell phone towers pinged did not match Jay’s story. But, and this is where everyone draws a sharp breath and clutches their chests, two calls between 7-8pm pinged tower L689 – the tower by Leakin Park. Not only the tower by Leakin park BUT also at the same time that Jay alleges they were actually there burying the body.

Let’s take a look at the map of the cell phone towers and the places Jay and Adnan were at during the day according to Jay: 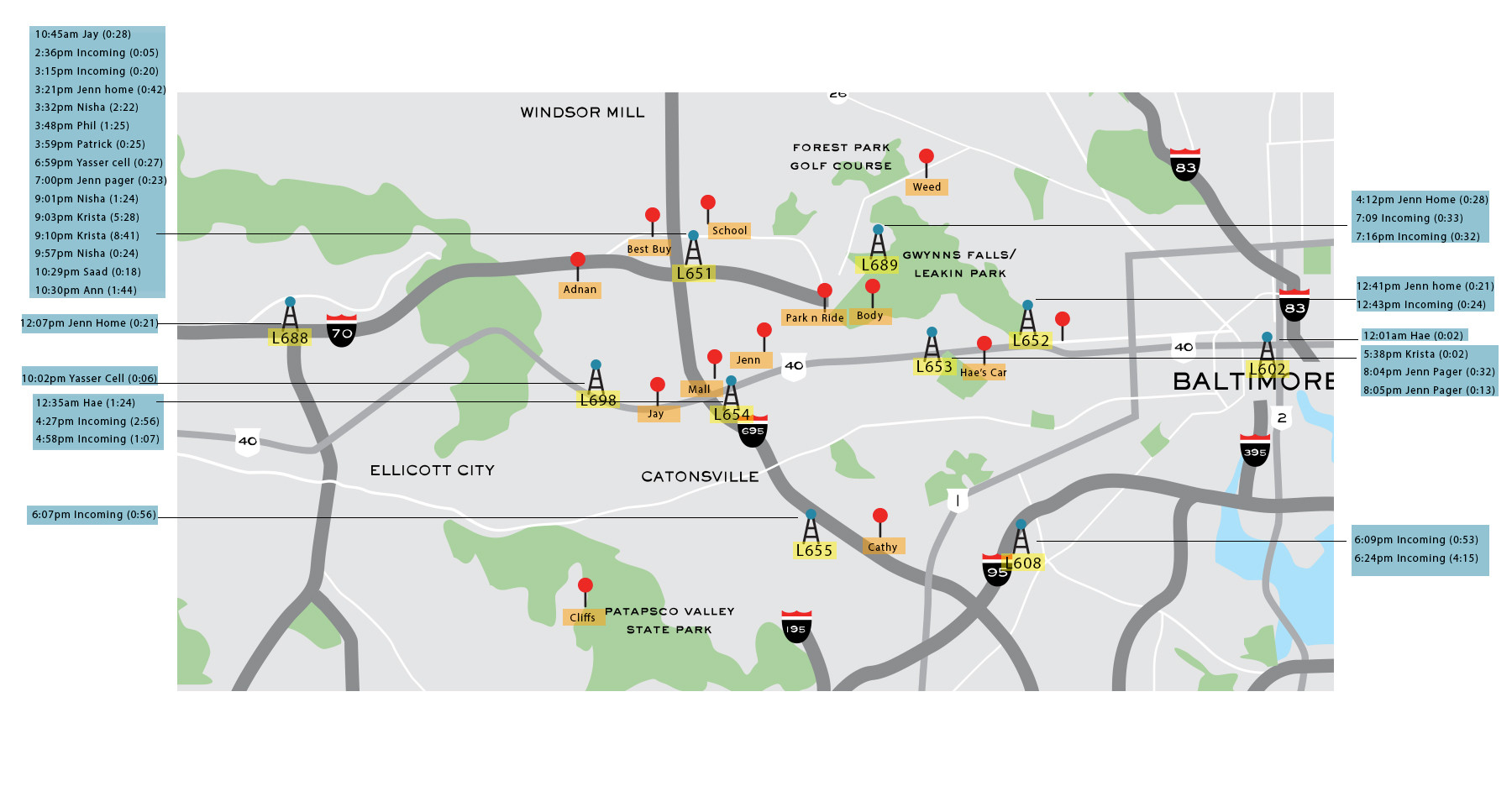 Now, it’s hard to see and read this map here, so you can go to the full version here.

Let’s start the night before. It was around midnight, the day of Jan 13th, 1999 had just begun. Adnan had apparently gotten a new cell phone and was giving his friends his number. He called Hae twice that night, at 12:01 am and again at 12:35am. Here are the cell phone towers that pinged during those calls:

Note on the map where these towers are located. They’re not even next to each other, they’re on opposites sides of the map. And neither of them are closest to Adnan’s home, which is where Adnan was calling from that night.

The next phone call is in the morning at around 10:45am, Adnan calling Jay’s house. He’s at the school and the tower that pings is L651, the tower by the school. All is good.

Next, from noon to about 6pm, we know Jay has the cell phone. We know that because Adnan, Jay, and Jenn have all verified it and we also know it because the very next phone call after the 10:45am call is a 12:07 call to Jenn. We can presume this is Jay since Jenn is not friends with Adnan.  Jenn is very good friends with Jay. Like very very good friends: 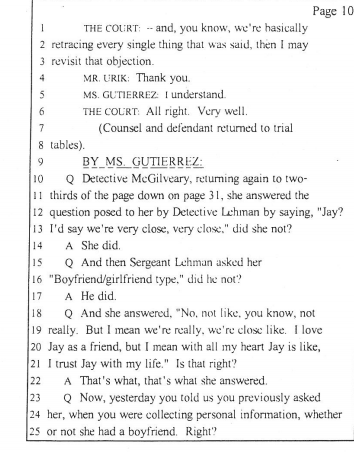 Did I mention she and Jay were close? So close that he made seven calls/pages to her that day but not a single call to his girlfriend Stephanie, whose birthday it happened to be.  It turns out Jen’s pretty close to the family in general. A search of her criminal records shows she was implicated in a crime with a close relative of Jay’s.

Ok, getting back to the call log and cell towers.

Now, according to Serial’s investigation and plotting the cell towers for the rest of the day, until about 6pm, Jay’s testimony does not match the cell towers, as I mentioned earlier. From around 1pm to around 3:45-4:15 Jay was at Jenn’s house (according to Jen), and got a call he was expecting at which point he left. As I said in my last post, in that time frame, two calls were actually  made to Jenn’s house. While apparently Jay was actually there. I haven’t seen this explained yet but I have to wonder – was Jay actually ever at Jenn’s house that afternoon?

Given the fact that Jay’s testimony does not match the cell phone records during 12-6pm, its either:

1) The cell phone evidence is reliable, but Jay is lying about where he was all day or

Adnan hit it on the head when he said to Sarah that when it came to the cell phone evidence, when it was in Jay’s favor it was deemed reliable but when it was against Jay’s story, it was essentially ignored. Given the fact that 10 out of 14 cell pings were not presented by the state at trial because they didn’t match the cell phone records, given the fact that the midnight calls to Hae ping’d totally different towers, and given the fact that experts themselves say there is no way to pinpoint a phone’s location by cell tower activation, you’d think I am going with option 2, the cell evidence is totally unreliable. But I’m not.

What I think is that the cell evidence is sometimes probably reliable in determining what area a phone is in, and sometimes not reliable. In other words the weight of this “evidence” is unreliable, though the evidence itself may sometimes be spot on. The problem is you don’t know when it’s spot on and when it’s not. Look back at the first graphic at the top of this post. That is the range for the Leakin Park cell tower. The graphic shows it goes up to 3 miles, but the range is actually up to 20 miles. It is as possible that Adnan’s phone was close to Leakin Park as it is possible that his phone (and he himself) were at the mosque or anywhere else in that range at that time.

But giving weight to spotty evidence as corroboration of Jay’s ever-changing testimony is a real…big…stretch.

Here is a good time to remember this: the timeline that Sarah and the Serial team used to match up to the cell phone records was the timeline Jay presented at the second trial. Which was different from the timeline he presented at the first trial. Which was different from the timelines he presented during his police interrogations (see my last blog post). Why did his timelines keep changing?  Maybe because as he was repeatedly shown the cell phone records by the police he realized his story had to fit those records. Of course it had to. Otherwise he would be useless in the case against Adnan and he’d lose any chance of a plea that let him walk scott free. Which he did.

Assuming that the cell tower evidence corroborates Jay’s story is actually backwards. What really happened is that Jay was shown the records repeatedly until his story matched up as well as it possibly could to the records. At some point Jay was burying Hae (with or without someone else there). There were three calls that ping’d the Leakin Park cell tower, two around 7pm, and one at 4:12pm.  Adnan couldn’t possibly be at Leakin Park at 4:12 because of track practice, so they had to go with the 7pm calls. The cell phone records didn’t give proof of Jay’s story. Jay’s story changed to fit the cell records.

So what about the 4:12 call?  It was outgoing, to Jenn’s landline. But Jenn said Jay was at her house at that time. It seems more likely he may have been at out of her house, calling her. Maybe from Leakin Park. Maybe not. But from her own house? Unlikely.

Its one thing to misremember exact times you went from one place to another, but first offering, then entirely omitting, the highly detailed episode about the Cliffs leads me to believe that Jay was made aware that this story just couldn’t fit the timeline he was offering or the phone records. Maybe he was encouraged to forget it.

It should bother everyone that the state apparently randomly decided the 2:36 call was Adnan calling Jay from a phone booth at Best Buy (of which there is no evidence that it ever existed) when both Jay and Jenn said he got a call around 3:30 or so. But a call at that time wouldn’t work. Here is why: 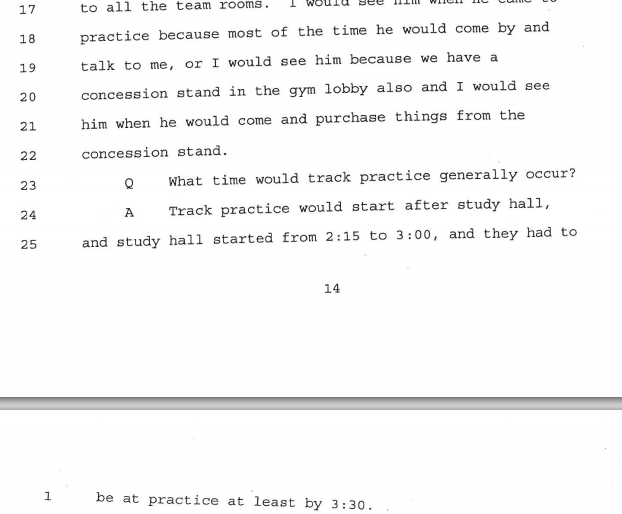 If the call Jay was waiting for came around 3:30, the state’s case is thrown off. And they couldn’t let that happen. So they picked the call that would allow Adnan to return to track practice in time. But barely, as we heard after Sarah’s attempt to drive the route as the state presented it.

I don’t know if others felt it, but my heart broke when I heard Adnan’s response to Sarah after she told him she was able to do the route to Best Buy by 2:36.  He was so sure it couldn’t happen because he actually never did it.